October 12, 2018
Hey everyone! I'm so excited, because today I have a special treat. To celebrate the release of Tricked (out today, so grab a copy!), I'll be posting a series of interviews featuring fun, trickster-themed questions and answers with each of the anthology authors.

Today we're kicking things off with the anthology's editor, science fiction and fantasy writer Kate Sheeran Swed. In Kate's story, "It's All Fun and Games Until Someone Usurps the Galaxy," the Supreme Galactic Emperor gets more than he bargains for when he takes on an ambitious building project. And that's all we can say about that. No spoilers here! But I guarantee this is a fantastic story you don't want to miss.


Without giving anything important away, who is your trickster in "It's All Fun and Games Until Someone Usurps the Galaxy," and what inspired you to write their story?


Who ISN’T a trickster in my galaxy? Heh, heh, you’ll have to read to learn more ;-)

I wanted to write an absurd sci fi story with an eye on current...well, let’s just say current political figures. I also wanted to play with the idea of rebellion, of what it means, what a rebel can be, and how they might ultimately be able to triumph. I kept thinking of Luke Skywalker as I wrote, and his assertion in A New Hope that the trouble with the Empire is so very far away from where he lives. We all know how true THAT turns out to be. Luke’s words were very much in my mind as I wrote.


Who is your favorite trickster from literature, movies, TV, folklore, etc.?


My favorite trickster is Supernatural’s version of Loki, who (SPOILER it was like fifteen thousand seasons ago but still SPOILER) of course turns out to be the Archangel Gabriel in disguise. He’s funny, he’s charming, and he’s annoying as hell. In other words, he’s the best.


If we were all characters in a heist story, what skill would you bring to our team?


I would bring the snacks.

KIDDING. OK, while in reality I’d be the one who tips over the room service cart I’m hiding under, therefore jeopardizing the entire operation, I would WANT to be the Jillian Holtzmann of the group. (Kate McKinnon in Ghostbusters? Yeah?) You know. Wild hair, quippy attitude, inventions that make Bond’s Q drool with envy, and ultimately make things go boom?


Everyone knows how much I love animals, so . . . If you had an animal mascot for your writing, what kind of animal would it be?


A dolphin! They’re playful and smart and fun to ride. (OK I don’t actually know about that last part, and I’m pretty sure we shouldn’t ride dolphins no matter what the PAW Patrol does, but I know a dolphin would be a cheerful writing mascot.) They’re quirky, like my stories. Plus, there was that talking dolphin on Seaquest DSV. Anyone else remember Darwin?

This goes along with my ongoing wish to write while staring wistfully at the sea, where my dolphin could roam free and visit at will.

Side note, I’m going to call this interview “How many geeky references can Kate throw out in less than 500 words?”


What project are you working on now?


I’m working on a sci fi imagining of Estella’s journey in Great Expectations. And that’s all I can say about that!

Thanks, Kate! I LOVE your geeky references. Always. <3  And, by the way, I need that sci fi Estella story in my eyeballs. Yes, please.

Don't forget to check out the anthology, and swing back here for the rest of the anthology author interviews when they post! 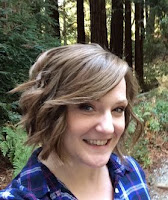 Kate Sheeran Swed loves hot chocolate, plastic dinosaurs, and airplane tickets. She has trekked along the Inca Trail to Macchu Picchu, hiked on the Mýrdalsjökull glacier in Iceland, and climbed the ruins of Masada to watch the sunrise over the Dead Sea. She holds degrees in music from the University of Maine and Ithaca College, as well as an MFA in Fiction from Pacific University. Her stories are forthcoming or have appeared in the Young Explorer's Adventure Guide Volume 5, Daily Science Fiction, Electric Spec, and Andromeda Spaceways. You can find her at www.KateSheeranSwed.com, or on Twitter and Instagram @katesheeranswed.